The Hidden Torture Farm: Be Careful What You Wish For

What follows is  a work of fiction based on the forthcoming special event at the hidden torture farm just south of Berlin on the 14th-16th August 2015. Madame Catarina will be joining forces with the amazing Lady Stella to provide a unique and immersive slave experience.

Did I say ‘What follows is a work of fiction’….perhaps it is perhaps it is just a description of something yet to happen…..

The panic was rising as he felt the fear growing within. This was meant to have been a game or so he thought. Why then was his mouth so dry and his palms so sweaty? Why did he jump at every unexpected sound and imagine things in the shadows. Why was he so scared? He knew they were playing mind games but the nervous tension was pulling him apart.

The first two locations he was sent to were bad enough; a disused factory and then a multi-storey car park but at least they were relatively easy to find and he could work out vaguely where he was in the city. He had started to imagine shapes in the shadows at the factory and was convinced he was being watched in the car park and now he was sure of it. This third location was pretty grim and he did not like the look of the subway that lay ahead of him. He really had no idea where he was and was now completely reliant on the directions he was receiving via text messages. 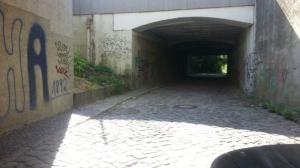 He had long been a fan of Madame Catarina and her movies and he especially liked the Agent One movies but somehow it didn’t seem to be quite such a game now in this soulless place. The whole area had an abandoned and derelict feel. They could have lifted him at any time over the last three hours but it seemed they were determined to make him sweat.

His phone flashed and he read the text message telling him to walk through the underpass.  When they would make their move? The tension was unbearable. It was the never knowing if they were lurking in the shadows just waiting to pounce that was getting to him? What would the snatch be like?

Would it be a quick blow to the balls, hood over the head, handcuffed and into the boot of the car or maybe it would be a clean and calculated snatch with a gun to his head? And then what would they do to him once they had him helpless and at their mercy? He had fantasised for years about being interrogated by Madame Catarina at the Hidden Torture Farm.  His mind wandered to the nipple torture and CBT he craved. With his fear momentarily half- forgotten he realized there was a familiar and  very pleasant swelling sensation in his groin as he thought about what was to come.

And then a trace of scent and the cold steel of a gun barrel pressed against the back of his head pressing his face into the underpass wall. Without warning an explosion of pain in his groin as a well-aimed boot hit its mark and he crumpled to the floor. Before he knew who or what had hit him his head had been unceremoniously stuffed into a sack and he had been securely cuffed. As he was led to the car he was told he was now slave eight and his interrogation and re-education would begin very soon…

Do you dare to make your dreams a reality?

Be careful what you wish for!

More details about the event here

You can find out more about how to serve Madame Catarina by following these links: 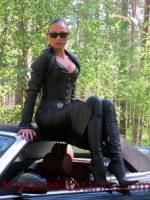 1 Response to The Hidden Torture Farm: Be Careful What You Wish For