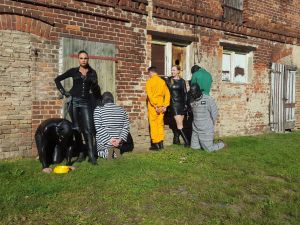 At the end of the day with the ponies safely stabled, the prisoners tightly and safely secured in their cells, monitoring devices in place and the dog in his kennel I was once more allowed to serve at table together with Madame Catarina’s other slaves. After dinner the atmosphere became a little more relaxed as both Madame Catarina and Lady Stella used us slaves variously as footrests, ashtrays and foot masseurs as well as to fetch and carry whatever they wished.

I felt a strange feeling of ‘contentment’…to be part of Madame Catarina’s stable of slaves and to be living and working in a real femdom environment. I knew that this is where I belonged and that the Mistresses could use any of the slaves however they wished and that any one of us would be eager and grateful for the opportunity to serve. I could probably write a couple of deep philosophical and psychological tomes on the feelings I experienced that evening…but I won’t! Suffice to say –big and deep emotions and another step on my journey into Madame Catarina’s slavery…which only made the events of the following day more deeply felt.

The following morning it was early to rise again after a night on the dungeon floor and after breakfast was prepared it was time for my morning briefing. Madame Catarina had decided that there were a few jobs to be done on the farm and allotted her slaves various tasks. I will not go into details but I messed up and took too long over my job. Madame Catarina was furious with me and summoned me to the farmhouse where I was made to stand in the corner whilst she decided what to do with me. After what seemed like an age Madame Catarina led me to the dungeon where I was told to wait. 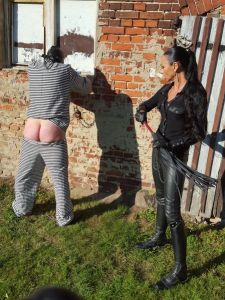 I was really distraught and cursed my stupidity for messing up the simple task Madame Catarina had given me to do. I have mentioned before in this blog how I hate to disappoint my Mistress and owner and as I looked around the dungeon I knew I was in serious trouble. I thought back over the last couple of weeks and all the mistakes I had made and only hoped that my last mess up would not result in my dismissal. This is always my biggest fear …that Madame Catarina will dismiss me from her service and never allow me to serve her again. As I looked around the dungeon I realised how totally helpless I was and only hoped she would decide to punish me physically in whatever way that she chose no matter how extreme and painful rather than send me away.

In due course Madame Catarina returned and told me to pull down my pants and bend over the bench. I did so immediately and Madame Catarina proceeded to deal out a thorough thrashing. To be honest I have received more sustained and harder thrashings from my Mistress but this time was different. This is not to say Madame Catarina spared the whips, it was a real beating and for many including myself this would usually be a pleasurable experience but this time I knew I this was meant as punishment. I could feel the anger and disappointment in each stroke and I knew I had let her down…the most painful feeling for any slave.

With the beating over I was told to pull up my pants and wait for my Mistresses’ return. As I stood waiting I could feel the warm glow that always comes after a beating rise across my ass and despite my wretchedness felt the stirrings of arousal. I knew I had become her thing that she could do with as she pleased and I would be grateful. All trace of freewill was gone I existed in a state of total and complete submission to my owner.

Madame Catarina soon returned to the dungeon to announce that she had decided to sentence me to hard labour for the rest of the event and led me to a site of broken bricks and rubble that required clearing. I set to work diligently eager not to displease my Mistress all the time hoping that I would be forgiven my misdemeanours all the time in the distance I could hear the sound of whips on flesh and the cries of slaves…mostly cries of pain but sometimes of ecstasy

Eventually the Hidden Torture Farm Event was over and all guests and slaves had left. I was summoned by Mistress and owner, told to wash a change and begin the process of tidying, cleaning and packing for the return to Madame Catarina’s saloon. If I was to do a good and quick job I would be given the honour of accompanying Madame Catarina to dinner at a favourite restaurant.

Several hours later I was sat with Madame Catarina and Lady Stella in a restaurant knowing I was the luckiest slave alive.

Of course Madame Catarina also offers sessions at her saloon in Central Berlin so if you genuinely wish to serve Madame Catarina in person please check out the details and links here . Genuine inquiries only!